Now I have to tell you even though I was hurt and hurt bad I still had my awesome sense of humor. My team Sgt. who I called “Big Guns” was there with me from the moment I got hit to the aid station before they sent me south to the combat hospital. He was trying to keep me from going into shock by telling me jokes and keeping me laughing. After he bandaged me up he said “Pete” (that is what my team called me) “guess what… now you get a Purple Heart!” By the way that was the only medal I didn’t want because it requires something like this to happen.
All this time he had to keep pressure on my foot to slow the bleeding down which is very painful. I kept telling him “Stop pushin’ on it that really isn’t helping the pain” he would just grin and say “it’s to stop the bleeding Pete I can’t” I said “fine let me bleed then it hurts.” By the time we got to the aid station the bed of the Hummer was filled with blood. When they pulled me out they had to open the tailgate and when they did it just poured out. I thought for sure I was done for I had never seen so much blood in my life.
This is the part that I don’t understand the nurses cut all of my clothes off and put a blanket over me. They said it was to make sure that I wasn’t hurt anywhere else and so they could easily get to the wounds. Yeah right I thought as I lay there in front everybody butt naked with a scratchy wool military blanket over me. Anyway after they stopped the bleeding they sent a Chaplin in to see me. He said “is there anything you would like?” after a second I said “yeah. Where is my CD player?” he looked at me kind of weird and I’m sure he thought I was nuts! But I was concerned because I had my Captain’s brand new Good Charlotte CD in it that I was listening to and it was in my cargo pocket of my uniform. Now you are probably wandering what that has to do with anything. My leg was hit right above the cargo pocket and I thought that it went through the CD player. I wasn’t really worried about the massive holes in me at this time because I was at the aid station but if that CD was broken I was toast. Everything was ok with it and with me for the time being.
Now they had to send me to the field hospital so they could get the shrapnel out of me. They couldn’t wait that long because their biggest concern was that Depleted Uranium was used in almost every bomb over there and if that was in me I had a bigger problem than bleeding to death. The hospital was about 35km away and it took about 45-50 minutes to drive there. So I got to fly in a Black Hawk! The coolest part about this was my whole 6 5 man team got to load me into the helicopter. It may sound dumb but this was a very sad time for me because this was like I was being forced away from my family. This was the first time we were separated in six months. It was already tough for me leaving home to go to basic training, AIT, and then war. Now I was doing that all over again. None of this hit me at the time…
Posted by Adnox at 6:19:00 PM No comments:

Just a truck on the side of the road

For starters I will tell you a little about what happened to me and then we will go from there. I was wounded during combat in on July 14 2003. We were ambushed from the side of the road by Insurgents. They had set up an I.E.D. (Improvised Explosive Device) near a truck that looked like it had broken down. Like most vehicles there this was not uncommon however when our vehicle approached they attacked, detonating the I.E.D., shrapnel tore through the HUMVEE like rocks falling through a wet paper towel. I was hit by the burning hot metal in two locations the first my right thigh and second my left foot. It didn’t do much but a small flesh wound through the muscle tissue in my thigh. This was obsolete when looking at blood pouring from my boot. It was a massive hole the size of a quarter and it went through my foot like a drill. Starting at the middle of the arch going all the way across. The nerve was destroyed, the artery was severed and I was loosing a lot of blood. I started my timer on my watch after I realized what happened. I wanted to make sure that if I passed out the doctors would know when it happened and how long I had been bleeding. Forty four minutes to be exact. Now I have to say that I am not a doctor in any way, but when any one bleeds from an artery for that long you shouldn’t still be breathing. In my case however I was! Now I am not saying it wasn’t tough being hurt, but the things that followed were VERY trying on anyone…
Posted by Adnox at 1:03:00 PM 1 comment:

WARNING: This is not a test

I just wanted to let every one know that I am going to be using my blog as a “Therapy dumping ground” for all my war memories so I can hopefully unburden myself and have a lighter load (heart, mind, and soul). I will be writing ALL my memories and thoughts of Operation Iraqi Freedom. So be WARNED there will be some VERY GRAPHIC posts, if this bothers you, you may need to choose now to discontinue reading my blog its up to you. There will be good memories and bad but they need to be out here instead of cooped up in me. So get ready because here they come… 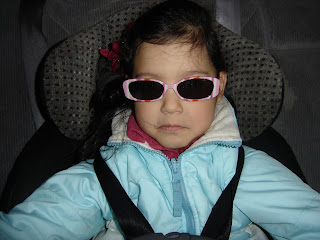 This is her and now you can see that she is adorable! If I may say so myself. This was taken on the way back from Grandma's house, she always wants to go there I think it is possibly the fact that Grandma gives her treats and dessert before she finishes dinner. Grandma says in her defense "that is what Grandmas are for". I absolutely love her she is always surprising us with how smart she is and keeping us on our toes with constantly coloring on things. I guess its what I get in return for being a "Terror" when I was little. One time I didn't stop touching the fire poker my dad smacked my hand and told me "no" then I went back and did it again this time while looking right at him, he obviously didn't find it amusing as he smacked me again this time saying "No" a little louder. Well to make a long story short I still did it and received numerous swats. I finally quit when I joined the army but in my mind and heart I still long to touch the fire poker. So that is how devious I was. Hannah isn't even close to how bad I was; she is a perfect little girl even when she is bad. She is now 4 and is continuing to grow she loves to help with EVERYTHING even when you don't want her to. She always tells me when the stop lights are green and she says "its green... GO DAD GO... GO GO GO GO" the first time she did it I laughed and I know that is why she continues to. She follows after everything I do because she wants to be like me. I have to watch a lot of what I do because she watches so close. I basically can't do anything bad in front of her because she will do the same and I don't want her calling all dogs that bark "stupid dog". We heard her one time after she dropped something say "Crap... not again" so now I watch where I say that. I hope you enjoyed me talking about her 'cause I sure did.

Email ThisBlogThis!Share to TwitterShare to FacebookShare to Pinterest
Labels: daughter

Well all I have to say is "SHOW ME" Better roads. We were traveling back from MN yesterday on I-35 and Dang those roads are bad. Every 10 feet bump and pot holes are everywhere. I would think that one of the only Major Highways to go north through our state could be maybe just a little better. Of course I have to say my daughter thinks it is fun bouncing every second but my car nor I feel the same way. So MODot what are you going to do about it. I think for one thing we don't need a brand "spanking" new welcome center at the entrance of the state 'cause no one is coming here Duh... our roads SUCK. I also want to add that the sign that you see when you come across the border is LAME. Seriously I've seen more enthusiasm drawn in the stall on a bathroom wall. Come on at least put a picture on it or something. I challenge MO leaders to step up to the plate and do something "Show Me" how good it can be. Good luck causing traffic to back up for weeks fixing the roads.

Email ThisBlogThis!Share to TwitterShare to FacebookShare to Pinterest
Labels: complaints

I want to go on a vacation.

I travel a lot but really don't go on vacation. I would sometime like to just go somewhere for fun, not to visit family (although thats ok) but to get away from life just for a little while. I think everyone needs a break now and then. I will be travelling again in a couple days maybe I can act like I am on vacation even though I am just going home. Oh well.

When I stay up late at night, although I am in bed.
All I do is write write write, When I don't take my meds.
I have the toughest time, focusing on sleeping.
Calming down my mind, it's so hard to close my eye's and time is really creeping.

Don't know what else to do, is thinking causing me these issues.
I'm so tired I feel like poo, if I can't get off to snooze-----land.
I really need to go to sleep, I really need some shut-eye.
I have been up counting sheep, this is true I won't lie.

Email ThisBlogThis!Share to TwitterShare to FacebookShare to Pinterest
Labels: poetry

I just mowed the front lawn and boy it was tall. It has growing since "Spring" started and this is the 1st time this year. I have to say though it wasn't as tough this time for some reason beyond my knowledge the mower started instantly. I know it was a miracle because it doesn't start instantly after just a week let alone half a year. I am glad it did to 'cause it had to work flawless for me to ever use it again. I mean if it didn't work this time, we were going to have some words. Well that is all for now I will keep you posted. Until next time...

My little one wants to play soccer so bad. She doesn't know this yet but we got her one for her B-day. She will be so excited. I can't wait to play with her too.
Posted by Adnox at 7:03:00 PM No comments:

Email ThisBlogThis!Share to TwitterShare to FacebookShare to Pinterest
Labels: daughter